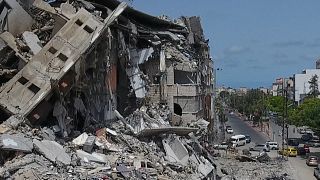 The scale of destruction in the northern town of Beit Hanoun was immense, with buildings bombed-out, infrastructure pulverized, and furniture shattered.

With rakes and brooms, families set to work sweeping debris from their cinder-block apartments, tossing bricks into piles.

While elsewhere Palestinians were declaring victory, many residents, having lost family members, friends and homes, felt there was little to celebrate.

But the rocket barrages that brought life to a standstill in much of Israel were seen by many Palestinians as a bold response to perceived Israeli abuses in Jerusalem, the emotional heart of the conflict.

The truce faces an early test on Friday, when tens of thousands of Palestinians attend weekly prayers at the Al-Aqsa Mosque compound in Jerusalem, a flashpoint holy site revered by Jews and Muslims.

Celebratory protests could spark confrontations with Israeli police, setting in motion another cycle of escalation like the one that led to the war.