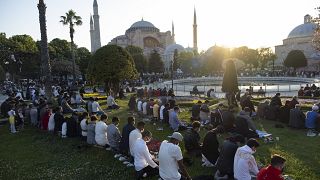 Hundreds of Muslims attended dawn Eid al-Fitr prayers at Istanbul's iconic Hagia Sophia for the first time since it was controversially reconverted into a mosque last year.

The three-day Eid al-Fitr festival marks the end of the holy month of Ramadan — the month of prayer and fasting for Muslims around the world.

Muslim worshippers pray inside and outside the mosque. Many of them express solidarity with Palestinians as hostilities with Israel continue

Originally a cathedral, the Haghia Sophia was turned into a mosque after Istanbul's conquest by the Ottoman Empire.

Last July, Turkey's president formally converted the religious landmark back into a mosque and declared it open for Muslim worship following a ruling by the high court that annulled a 1934 decision that had decreed the building should remain a museum.