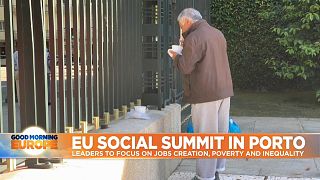 European Union leaders are meeting in Portugal on Friday for two days of talks aimed at advancing the agenda for a social Europe.

The summit hopes to repair some of the damage the coronavirus has caused in the bloc, with a focus on job creation, poverty and inequality, the green and digital transitions.

This is the 27-nation bloc’s first face-to-face summit meeting this year in a signal that the threat from COVID-19 might be waning amid a quickening vaccine rollout.

The EU is looking for endorsement in Porto of three headline targets: an EU employment rate of at least 78%, at least 60% of adults attending training courses every year, and reducing the number of those at risk of poverty or social exclusion by at least 15 million people, including 5 million children.

The push for social safeguards, largely led by centre-left EU governments, has caused some tension within the bloc. Last month, 11 governments welcomed the Porto effort but warned EU authorities against meddling in national policies.

In a late addition to their agenda, EU leaders will also discuss Thursday's US proposal to waive COVID-19 vaccines patents to help speed the end of the pandemic.

"Long term policies are absolutely the way to go," when it comes to social safeguards, said Chloé Sermé-Morin, a consultant with FEANTSA, an NGO fighting homelessness in Europe.

Sermé-Morin told Euronews that the social impacts of the pandemic were concerning.

"We know that we see a rise in extreme poverty. We saw in different countries queues for food banks, for instance. And we are really worried about the fact that we will see in the coming years a steep rise in street homelessness if we don't do anything."

"We see that the European Union is committing to have a European platform to combat homelessness in the coming months. The Portuguese presidency will launch it in June. So we are hopeful that European leaders will take the challenges on board," Sermé-Morin told Euronews.

Some EU countries have already sent medicine and equipment to India.

India and the EU spent six years trying to negotiate a free trade deal before giving up in 2013. Among the thorny issues were vehicle parts and digital privacy.

Plans for a face-to-face EU-India summit in Porto fell through after Modi cancelled his trip due to the pandemic, but it is the first time an Indian leader will participate in a meeting with all the EU’s leaders.

Despite a slow start to its inoculation drive, the EU this week passed the milestone of 150 million vaccinations and reckons it can reach what it calls “sufficient community immunity” in two months’ time.

The European Commission proposes relaxing restrictions on travel to the bloc this summer.

Who can move around, when and where remains a sensitive question for Europeans, however.

Pandemic improvements have been uneven across the continent, and many Europeans remain subject to irksome restrictions. In a political nod to those concerns, German Chancellor Angela Merkel and Dutch Prime Minister Mark Rutte won’t travel to Portugal.

And as a reminder of the risks, Maltese Prime Minister Robert Abela won't be attending because he is in quarantine after his wife tested positive on Wednesday.

Pandemic fundamentals remain unchanged: those attending the summit must show negative PCR tests for COVID-19, while social distancing and mask-wearing are required.

The summit will make a splash in the picturesque Atlantic coast city of Porto, with a population of just over 200,000. Most of the city’s hotels have been shut since last spring due to COVID-19, and local gripes about streets being overcrowded with tourists now seem a distant memory.