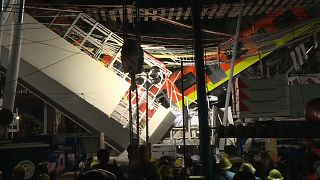 At least 15 people were killed and dozens injured when an elevated metro line collapsed in the Mexican capital on Monday as a train was passing, authorities said.

Security camera footage broadcast by local media showed the carriages plunging towards the ground in the south of the city.

Emergency services were seen working to rescue victims from the carriages at the Olivos station.