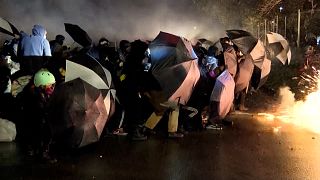 Clashes break out between protesters and law enforcement as hundreds gather for the third night in a row outside Brooklyn Center's police station, in the suburbs of Minneapolis, after a police officer fatally shot Daunte Wright. The killing of this 20-year-old Black man has fueled tensions in the US city already on edge because of the George Floyd murder trial.