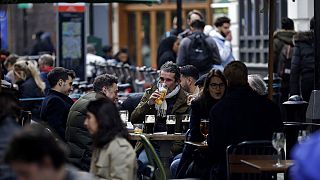 Shoppers and pubgoers flock to streets as venues reopen in England

A handful of venues in England with 24-hour licences opened their doors to punters at 00:01 am, with customers braving the freezing temperatures to enjoy an outdoor pint for the first time since January.

From Monday, pubs and restaurants in England can resume outdoor service and will be joined by venues in Scotland on April 26. The Welsh government has yet to set a date.

Non-essential shops, hairdressers, gyms and swimming pools also reopened on Monday morning, as well as some outdoor attractions such as zoos and theme parks.

One of the venues to reopen last night was Showtime, a sports bar in Huddersfield in the north of England, which hosted 50 customers for 90 minutes in a small celebration.

Co-founder Ian Snowball told Euronews: "When we opened after the last lockdown, it was absolutely manic: people waiting three hours to get in, and there was so much tension in the air.

"This time, it was the complete opposite. Everyone was calm, polite and understanding of the problems and constraints we all had to work within. Every single person said how happy they were, how nice the atmosphere was and how friendly everyone was.

"As tough as this has all been, it does seem now that a lot more people are grounded in their understanding of the effects of the pandemic. It would be great to think that we could keep this up for some time to come."

Infections, hospitalisations and deaths from COVID-19 have fallen in the UK since the second wave of infections in early January.

There have been 240 deaths in the past week, down from a peak seven-day average of around 1,400 in January. At least 60 per cent of the population has now had at least one dose of vaccine.

Despite this, Prime Minister Boris Johnson has urged people to "behave responsibly". In a statement released yesterday, he said: “It will be a huge relief for those business owners who have been closed for so long, and for everyone else, it’s a chance to get back to doing some of the things we love and have missed.

“I urge everyone to continue to behave responsibly and remember ‘hands, face, space and fresh air’ to suppress COVID as we push on with our vaccination programme.”

Also today, parent and child groups of up to 15 people can meet indoors and self-catering holidays within the UK are allowed.

Chris Donnelly, Founder & CEO at VERB, a luxury digital marketing agency based in Liverpool, has taken the unusual step of giving all 65 of his employees the day off today to celebrate after three months of lockdown.

He told Euronews: "I just wanted to give people a bit of time to enjoy themselves. Everyone has been isolated for so long now. People haven't been able to have a haircut or go to the gym; just giving everyone a day off, I feel, is a tiny gesture."