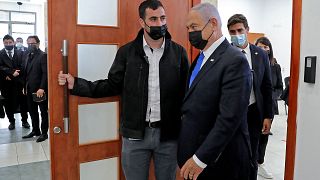 Israeli Prime Minister Benjamin Netanyahu has appeared in court for the resumption of his corruption trial. The evidentiary phase of the trial begins as Israel's political parties meet with the president to weigh in on who should form the next government following last month's inconclusive elections.

The March 23 vote was largely a referendum on Netanyahu but produced no clear verdict.

He has dismissed the allegations as a "witch hunt" by hostile media and law enforcement.

Outside the courtroom, dozens of supporters and opponents of the prime minister gathered to protest on opposite sides of the building amid heavy police presence, highlighting Israel's deep divisions.

Anti-Netanyahu protesters have held weekly demonstrations for months, calling on him to resign.