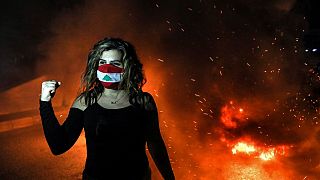 Lebanese protesters continued to block major roads and highways in Beirut for a third straight day, over the crippling economic crisis in the country.

Dozens of protesters tried to hamper traffic by burning tires and rubbish in the city to send a message to politicians, said one of the protesters, Hussein Ali.

"All of them (politicians), no exception should be in this rubbish here," Ali said. "We don't want to migrate out of Lebanon. We don't want to leave Lebanon to them. This is our country."

"There is no work," said Ali Ghaddar, another protester. "Everyone is hungry. Every faction, there is no specific faction, all the factions, we are all hungry."

Lebanon has been hit by one crisis after another, with widespread protests against the country's corrupt political class breaking out in October 2019.

That has been compounded by the coronavirus pandemic and a massive blast in Beirut's port last August that decimated the facility.