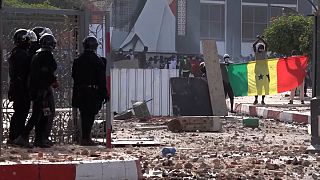 It is the second consecutive day of protests in different Senegalese cities supporting Sonko and criticising the government of President Macky Sall.

Sonko was arrested on Wednesday on charges of disturbing public order after hundreds of his supporters clashed with police while he was heading to court to face rape accusations brought against him.

Sonko, who came third in elections two years ago, was accused of rape last month by an employee at a beauty salon.

He was summoned by a judge to appear in court for questioning on Wednesday after his parliamentary immunity was lifted last week.

Sonko has been a strong opponent of Sall since 2012 and he and his supporters claim the charges are politically motivated.