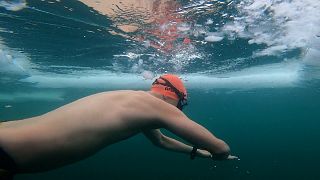 Taking just one deep breath and without wearing flippers, David Vencl has swum 141 metres underwater. He can hold his breath for eight minutes.

"The problem is not distance, but cold," explains the extreme athlete, who has been training for the record for a long time.

He wears shorts in all weather conditions, and dives into a barrel of ice water from his balcony. But mainly he swims with friends in Lake Barbora near Teplice.

His aim is to swim under the ice for 80 metres, that's about a minute and 40 seconds underwater. The swimmer will be tied to a rope and will be secured by divers with equipment.

There will be about five holes in the ice in the event of an emergency.

In order for David Vencl to break the record officially and enter the Guinness Book of Records, he must swim under ice that is 30 centimetres thick.

There is no such place in the Czech Republic to meet those conditions, so David is planning to go to the glacial lake Weissensee in Carinthia, Austria at the end of February, subject to pandemic restrictions.

David Vencl represents the Czech Republic in scuba diving, in which he has won the national title and holds several records.