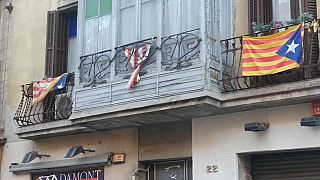 Catalonia prepares to head to polls for Sunday's regional elections

Catalonia is preparing ballot boxes, votes and anti-COVID 19 measures ahead of a controversial election that comes in the midst of a third coronavirus wave across Spain.

These are the fifth elections in a decade which until now have been marked by pro-independence mobilisations. But the back-drop of the elections is quite different this time.

Marc Guinjoan, Political Analyst with Universidad de Barcelona says people are weary to go out and vote in the middle of a pandemic. "There is also a feeling of weariness within the pro-independence movement because there was a “clash” with Spanish state in favour of independence and for some reasons that was not possible. Now most pro-independence electors are showing a certain reluctance to vote in these elections".

Two pro-independence parties currently govern the region with the support of the anti-capitalist party. For the first time in recent years, the priorities of voters are elsewhere.

Local resident Guida Ayza says, "Independence is gone because there are now issues that are much more important, such as the pandemic, and the social crisis in general. I also think we had the opportunity to do something and it wasn't done. I don't know whose fault it is, but it just was not done"

The internal fractures of the pro-independence movement and differing approaches on how to achieve their goals have generated disappointment among its voters.

The results of these elections will influence national politics. The agreement to form a Government could reshape the political alliances in Madrid.