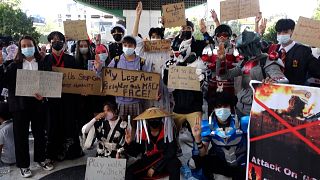 As they flood streets across the country in opposition to last week's military coup, a younger generation of Myanmar protesters have dressed up for the occasion in cosplay and Marvel heroes cracking jokes at the military's expense and winning fans on social media with their colourful and witty signage.

It came as tens of thousands of people took to the streets of Myanmar's biggest city, Yangon, for a fifth consecutive day on Wednesday, defying a ban on protests as the military moved to tighten its grip on the country.

Crowds swarmed through Yangon demanding the release of Aung San Suu Kyi, facing down police a day after officers dispersed crowds elsewhere with tear gas and rubber bullets, and ramped up their harassment of the ousted leader's party.