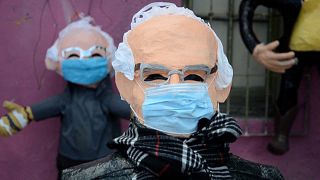 A piñata workshop in Mexico has recreated a viral Bernie Sanders image, showing the Vermont senator sitting at US President Joe Biden’s inauguration in a winter jacket and mittens.

They're made by Dalton Ávalos, who builds the 1.10-metre-high figure with wire and cardboard and adds glasses and a checkered scarf.

Ávalos says the idea of making a piñata inspired by the 79-year-old Senator came to him after the wave of memes that flooded social media with the image.

Piñatas play a traditional role in Mexican fiestas, such as birthdays, where blindfolded attendees hit them until they drop, releasing sweets or fruit.

The photo of the lawmaker, a two-time presidential hopeful, has proved lucrative in charity sales in the United States.

Sanders announced on Wednesday that he had raised $1.8 million (€1.4 million) for charity by marketing items featuring his image at the presidential inauguration.