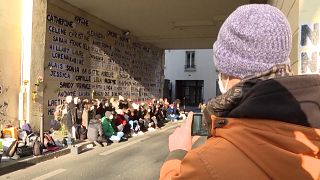 Activists pasted the names of over a hundred women who lost their lives to femicide in 2020 to walls on Sunday in a protest in central Paris.

The names of 111 women who killed by domestic violence in 2020, including sex workers and transgender people, were glued to the walls of covered passageway in the central 11th district of the French capital.

The sheltered location was chosen by activists to ensure the improvised memorial would not be easily destroyed by the winter weather.

Domestic violence increased by 60 per cent during the second pandemic-related lockdown, according to official figures released by the French government.

Calls to domestic violence helplines had already shot up by 40 per cent during the first lockdown at the beginning of the pandemic.