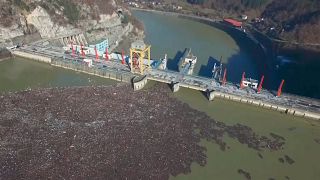 These are islands of waste that have formed on a major river in Bosnia and Herzegovina.

They are causing an environmental emergency and threatening a regional hydropower plant.

Plastic bottles, wooden planks, rusty barrels and other garbage could be seen clogging the Drina river near the eastern town of Visegrad on Tuesday.

Upstream, the Drina tributaries in Montenegro, Serbia and Bosnia carry even more waste after swollen winter waters surged over the landfill sites near the river banks.

Officials say that between 6,000 and 8,000 cubic metres of waste are pulled out of the Drina each year near Visegrad.

A broken barrier this week caused a massive build-up of rubbish on the river.

The problem is not new - Balkan nations have poor waste management and tonnes of rubbish routinely end up in rivers.

But Bosnia, Serbia, and Montenegro have done little to fix it even as they seek to join the European Union.

Following the war in the 1990s, the region is still lagging far behind the rest of Europe, economically and with regard to environmental protection.