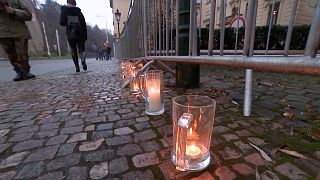 Hundreds of protesters gathered in Prague, Czech Republic on Sunday with empty beer glasses to rally against the closing of pubs and restaurants in the country.

The Czech Republic re-imposed COVID-19 measures ahead of Christmas due to a surge in infections, which included the closing of bars, restaurants and hotels.

The demonstrators, many of whom work in the hospitality industry, lit candles inside beer glasses and set them in a line stretching about a kilometre (0.62 miles) from the city centre to government buildings.

Bars and restaurants were allowed to reopen on December 3 as infection rates were on the decline, but they were forced to shut their doors again on December 27 when cases started to rise again.

He said the government will compensate the businesses for their losses.

All shops, except those selling essential goods such as food and medicine, have also been ordered to close.