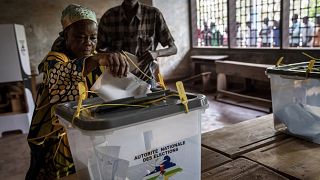 People in the Central African Republic cast their ballots in the presidential and legislative elections as polls opened on December 27th morning.

In the capital Bangui, long lines of people waited to vote in an electoral process marked by the threat of increasing violence in the country.

"I am really pleased (to vote) and I ask the citizens, even those who are still at home, to come and vote massively so by tomorrow, peace returns to our country," said Bangui resident Désiré Ngaibona after casting his vote.

The opposition parties had wanted the vote to be delayed, alleging poor preparations and an electoral body influenced by the president.

President Faustin Archange Touadera - also a candidate himself - said the vote will go ahead despite recent clashes between government forces and rebels.

The government blames the unrest on former President Francois Bozize, who returned from exile a year ago and has been blocked from running in the election.

Bozize has been accused of joining up with armed groups in an attempt to stage a coup. He has denied this.