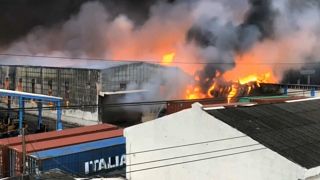 Explosion at pharmaceutical factory in Taiwan kills one

At least one person has died and another has been injured following an explosion at a pharmaceutical factory in Taiwan's Taoyuan City.

The blast on Sunday caused a fire at a factory, which wasn't fully extinguished until Tuesday.

Thick smoke was also seen rising into the air for several days after the explosion.

An investigation pointed to a chemical leak in nearby sewers as the reason the blaze kept burning despite a prompt intervention from local firefighters.

A 30-year-old foreign worker from the Philippines suffered third-degree burns to 80%-90% of his body and subsequently died on Monday in hospital.

Another 40-year-old man suffered burns to his hand.

The cause of the explosion remains under investigation.