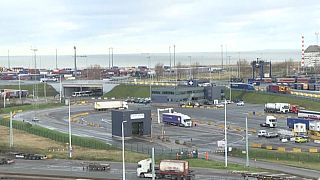 AS UK-EU officials continue their efforts to reach a Brexit-trade deal by December 31, Belgian customs and logistics companies are preparing for an uncertain outcome.

The Belgian port of Zeebrugges could be checking more than 80 containers per day from 2021 compared to barely ten scans and checks a day on average before Brexit.

The work is also going ahead to stockpile and ship Europe's biggest brands to British supermarkets before the New Year.

Charlotte Daneels, Supply chain Integration manager for transport and logistics company 2XL said they will try to "be ready and up-to-date, for a deal and for a no-deal scenario."

"They are two slightly different scenarios, so we need different information," Daneels said.

The Belgian company has even contacted retired customs officers to seek advice on how shipping used to work before the European Union's single market reduced bureaucracy and opened borders.

Patrick Van Cauwenberghe, the Port of Zeebruges Trade Facilitation Director said he's uncertain companies across the continent are ready for the changes ahead.

"There will also be truck drivers coming here from Romania, or Italy, and they'll probably know nothing or almost nothing, they won't have the papers prepared," he said.

In Calais at the entrance to the Channel Tunnel that connects France to the United Kingdom, the prospect of delays and recurring traffic jams linked to Brexit is already testing the patience of many.

The tailbacks are likely to continue into next year when customs, standards and immigration checks will kick in on both sides of the channel.

After a half-century of close economic integration, the new challenge of Brexit is turning into a leap in the dark.