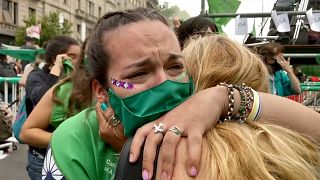 This was the reaction in Argentina after the mainly Catholic country moved a step closer to legalising abortion.

MPs approved a law - by 131 votes to 117 - that would legalise elective abortions to the 14th week of pregnancy.

It must now be approved by Argentina's upper house, the Senate.

Activists, reacting to the vote in parliament, wept with joy as they held up banners in green, their campaign colour.

Agustina Felice, of the National Campaign for the Right to Abortion, spoke of her "deep joy and emotion," saying she had been fighting for this for the past 15 years.

Two years ago, during the administration of conservative President Mauricio Macri, the Senate voted against a similar bill to legalise abortion after it was narrowly approved by the lower house.

Latin America has some of the world's most restrictive abortion laws. Mexico City, along with Cuba and Uruguay, are among the few places in the region where women can undergo abortions during the first 12 weeks of pregnancy regardless of the circumstances.