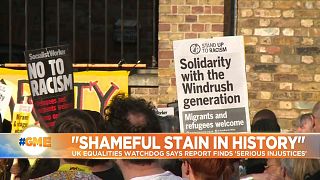 A new report has found the UK Home Office 'unlawfully ignored warnings' made before changes to immigration rules affecting the so-called Windrush generation.

The report released by the UK equalities watchdog states that thousands of children, who had travelled to the UK on their parents' passports in 1971, were adversely affected by immigration rules introduced in 2012 by the then Home Secretary Theresa May.

Watch an interview with a lawyer representing 200 of the victims of the Windrush scandal in the player above.

Eleven bodies are buried in a cemetery in Bucha, where more than 400 other unidentified people are buried. "Most of them were shot dead. So it was neither an accident nor an explosion.