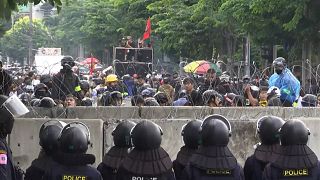 Hundreds of police officers had been watching over the demonstrators, who had gathered outside Thailand's parliament for the anti-government rally.

Nearby, politicians began to hear seven draft constitutional amendments, which were scheduled to be voted on in a two-day joint session of the House and Senate.

Seven draft constitutional amendments are scheduled to be voted on, but it is not expected that parliament at this point will agree on specific changes for inclusion in a new charter.

Instead, parliament is likely to establish a constitution drafting committee to write a new charter. This would allow the government to say it is willing to meet the protesters’ demands at least halfway while buying time with a process that could extend over many months.

The student-led movement has staged mass rallies around the country for months and has called for substantial changes to the constitution and reforms to the monarchy.