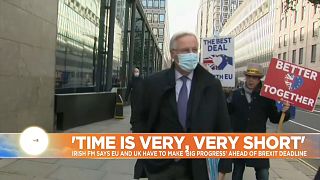 It's crunch time for the Brexit trade talks. Further intense discussions are continuing this week. The final sticking points 'can be resolved', according to one UK minister, but the Irish Foreign Minister, Simon Coveney, has said that talks have ‘got to make big progress.’ Any agreement between the UK and EU would need to be ratified before 31 December.

Simon Usherwood is a Professor of Politics at the University of Surrey. He thinks if we don't have a deal by the end of this week, it'll be very difficult for the EU to be able to get it ratified in time.