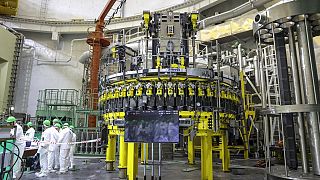 The Russian-built facility at Ostrovets - also called Astravyets - is just 20km from Lithuania and the European Union.

It has begun producing electricity and been connected to the country's power grid, according to Belarusian electricity operator Belenergo.

Vilnius has long opposed its construction, arguing the project has been plagued by accidents, stolen materials and the mistreatment of workers

It immediately cut off electricity imports from Belarus and neighbouring Latvia said it had also blocked imports of energy generated by the plant.

Russia’s state nuclear corporation Rosatom, which built the plant, has rejected the Lithuanian complaints, saying the plant’s design conforms to the highest international standards. The corporation also argued that the project’s launch would help reduce the region’s carbon emissions by up to 10 million tonnes of CO2 equivalent each year.

The Belarusian energy ministry said in August the plant's two reactors would eventually supply a third of the country's energy requirements.

Belarus suffered severe damage from the 1986 Chernobyl nuclear disaster, which spewed radioactive fallout from a plant in then-Soviet Ukraine across large areas of Europe. That painful legacy has fuelled opposition to the nuclear plant project in Belarus.

Lithuania closed its sole Soviet-built nuclear power plant in 2009. The government in Vilnius has offered free iodine tablets to around half a million people living close to the Belarus border to help protect them from radiation in case of an accident.