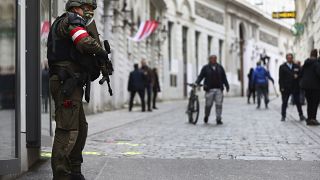 Candles lit and flowers laid at scene of Vienna shooting

Austrian authorities continued their investigation into a radicalised man who killed four people and injured at least 22 in Vienna as residents mourned the victims of November 2 attack.

Austrian police had raided several homes of people close to the attacker, who was identified as Austrian-North Macedonian dual national Kujtim Fejzula.

Two men and two women died from their injuries after the attacker, who was armed with a fake explosive vest, an automatic rifle, a handgun and a machete, opened fire at crowded bars and cafes in downtown Vienna.

In the days after the attack, residents have laid flowers and lit candles at makeshift memorial sites across the city centre.