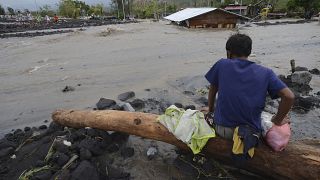 Typhoon Goni hit with gusts of 280 kilometres per hour.

Residents were warned about landslides, flooding and storm surges.

One of the most powerful typhoons in the world this year, Goni has evoked memories of Typhoon Haiyan, which left more than 7,300 people dead or missing.

It displaced more than 5 million in the central Philippines in November 2013.

Typhoon Goni did weaken before nightfall but remained strong. Manila's airport was closed from Sunday to Monday and the military and police were on full alert.