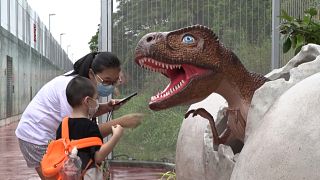 Cyclists and pedestrians stop to pose with a giant rampaging Tyrannosaurus Rex along a new cycling and jogging track in Singapore.

Over 20 models from nine different prehistoric species are installed along the kilometre-long path, including bright blue velociraptors climbing on a buggy, a baby dinosaur hatching from an egg, and a long-necked apatosaurus peering at passersby over the fence.

The Jurassic Mile is part of a new 3.5km connector that allows visitors to cycle into the city from the airport and vice versa.

The attraction has already drawn controversy after it opened earlier this month.

Changi Airport Group, which manages the path, installed additional netting after a stray ball from a nearby golf course hit a pedestrian and a dinosaur model was briefly removed for repairs after a video of a woman sitting on it went