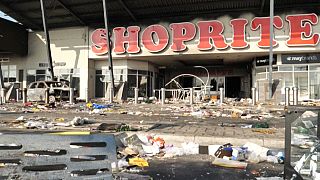 Nigeria's chief of police has ordered the immediate mobilisation of all police resources to put an end to days of street violence and looting.

He said criminals had hijacked anti-police brutality protests and taken over public spaces.

It's been three weeks since protests calling for an end to police brutality began, and in recent days Lagos has seen widespread looting of shops and warehouses.

But Africanews journalist Jerry Bambi says, "The looting is of food stocks that were meant to be shared during lockdown. What we are witnessing is unrest, frustration and anger from the population over what's seen as inefficiency and what some have described as bad government."

President Buhari has said that at least 69 people have died in street violence since the protests - mainly civilians but also police officers and soldiers.