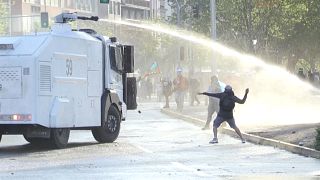 Chile: Protesters face off against police ahead of referendum

Protesters faced off against police in Santiago's iconic Plaza Italia square on Friday ahead of an October 25 referendum that could pave the way for Chile's constitution to be rewritten.

A young man was seriously injured when he fell from a bridge near the plaza, which has become the epicentre of a revolt against the conservative Piñera government.

Around 2,000 people gathered in the central roundabout of the capital, confronting police who used water cannons and tear gas to hold them back.

During the clashes between some of the demonstrators and the police, a young man fell into the Mapocho river, apparently while escaping from uniformed officers.

Chilean police said on its Twitter account that the incident was being investigated and had been reported to the Public Prosecutor's Office.

It also confirmed the arrest of 16 people and said four officers had been injured.

Protests began on 18 October 2019 to demand greater social rights and have so far left as many as 30 people dead, and thousands injured and detained.

A constitutional plebiscite will be held on 25 October to decide whether or not to re-write the current constitution, which was inherited from the Augusto Pinochet dictatorship (1973-1990).