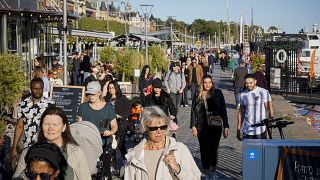 Sweden spared second COVID-19 wave - but for how long?

When you walk around Sweden’s capital Stockholm, it’s hard to see signs of the fight against COVID-19.

It's largely business as usual. Shops, restaurants and schools have all remained open throughout the pandemic. Not to mention, face masks are few and far between.

The country’s strategy has intrigued and even shocked many around the world, but ask Swedes and most will tell you that a lockdown wouldn’t have worked here.

"We would have had economic problems," one woman warned. "People would sit there and they can’t pay their rent, their bills and they get really depressed."

"A lot of countries are coming around and seeing that there’s not such a thing as a total lockdown that has really worked," he said.

Though Sweden didn't impose a lockdown or close businesses, life did change.

Authorities banned gatherings of more than 50 people and encouraged companies to embrace working from home.

Physical distancing has been a major part of the Government's advice.

Sweden's Health Agency has registered nearly 90,000 infections and more than 5,000 deaths from the virus since the beginning of the pandemic.

The country’s toll is significantly higher than that of neighbors Denmark, Norway and Finland

“This is not a disease we’re going to get rid of, so we need to keep it at a manageable level," he said.

He points to hospitals and other care facilities, which he says are handling the virus fine.

"This [current] level of spread is fairly acceptable until we have a vaccine in place, and hopefully can change into something even better."