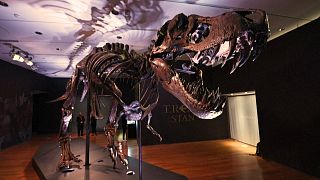 One of the largest, most complete Tyrannosaurus rex skeletons ever discovered is going up for auction next month.

It's named Stan after the palaeontologist who found the 67 million-year-old fossil.

"They are incredibly rare," he said. "You'd be counting the number of comparable rexes on your fingers.

"In terms of his history. Let's start right at the beginning, back sixty-seven million years ago when he was walking the Earth he was the apex predator of the late Cretaceous. He is 37-foot long and one of the fiercest killing machines has ever roamed the earth."