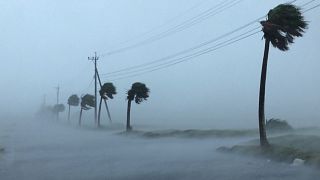 This is Japan being battered by winds of up to 144 kilometres-per-hour.

It cut power to tens of thousands of homes and prompted authorities to call for some 1.8 million people to evacuate.

The typhoon has also prompted the suspension of public transport operations.

Japan Airlines and All Nippon Airways suspended more than 300 flights on Sunday, mainly between Kyushu and Okinawa. It decided to halt over 370 flights for Monday.

The storm was forecast to move north and travel off the western coast of Kyushu before reaching the Korean peninsula Monday morning.