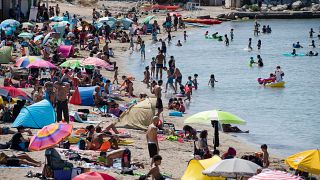 French health authorities recorded nearly 10,000 new COVID-19 cases this weekend and have warned that the virus is charting a dangerous course after a months-long decline.

Millions of people have taken holiday in August, including many who've headed to the south.

However, those seeking sunshine along the Mediterranean coast now find themselves in the latest Coronavirus hotspot.

The surge in cases is particularly prominent in France's southern regions, like Provence-Alpes-Côte d'Azur, Occitanie, and Nouvelle-Aquitaine, where the reproduction rate has topped 1.5.

That figure represents an average of how many people virus carriers are infecting. Each transmission can have a multiplying effect if the rate is over 1.0

All three regions now have an "R rate" that is higher than the French capital.

When lifting lockdown in early May, authorities said they would strive to keep the rate under 1.0.

However, their message has shifted to warn people that if the figure tops 2.0, the virus could spread dangerously quickly.

Three-quarters of the population take a summer holiday in August, according to recent estimates.

This year many holidaymakers are forgoing rules put in place to stop the virus.

"I’ve never gone on holiday with a mask. This is really contrary to what holidays are about," Mena, a tourist from Lille, told Euronews. "I don’t wear it all the time, even if it’s required."

Beaches and city centres along the French riviera are as crowded as previous years, and visitors say social-distancing is hard to see.

Enforcing rules has been a challenge for the tourism industry.

“People get together on holidays, there's a good atmosphere and they let themselves go a bit," said Patrice de Colmont, a beach club manager. "It's up to us to control them and calm them down if they're being a bit excessive."

Little compliance all around

Yet not all establishments are following French regulations that require waiters to wear face masks and keep their distance.

Many such workers encountered by Euronews were speaking to customers with a face mask on their chin.

Municipalities in southern France have tried to introduce local laws to counter the spike.

Mask wearing has been mandatory in most neighbourhoods of Marseille since 8 August, and dozens of other summer hotspots along the coast have followed their lead.

In some places. police are enforcing the requirement with fines that start at 135 euros.