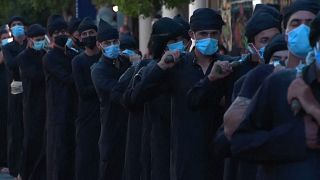 Visitors and locals in Iraq started the mourn ceremony for Imam Hussein on Friday by beating themselves with chains, walking towards his shine in the city and holding funeral sessions in the mosques.

Friday marks the first day of Muharram and the start of the Islamic New Year, which is based on lunar cycles.

Typically, thousands of people would march toward the holy shrine of Imam Hussein in the city of Karbala in southern Iraq.

But this year is different, as there are fewer people on the streets and near the shrine due to the coronavirus.

Many cannot travel to Karbala to visit the shrine because of a virus-related travel ban.

Some are also worried they could contract the virus from crowded places.

Later in the month of Muharram Shiite Muslims celebrate the historic battle of Karbala, when the grandson of Prophet Mohammad was killed during a siege in Karbala city, 100 kilometres (62 miles) south of Baghdad.

The event contributed massively to the schism that led to the split between the Sunni and Shiite sects of Islam.

The religious commemoration is known as the Ashura and is marked on the 10th of the month.