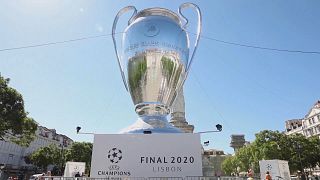 A day before the Champion's League final on Sunday, tourists, Bayern Munich and PSG supporters gathered at Lisbon's Praca Dom Pedro IV, in the city centre, where a giant replica of the trophy is displayed.

The final stages of the competition are being played behind closed doors in the Portuguese capital Lisbon due to the coronavirus pandemic.

The German football club is looking to clinch their sixth crown, while Paris' hometown team is just glad to make their first final.