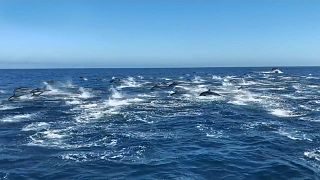 A pod of as many as 300 dolphins were seen “stampeding” off the coast near Dana Point in Southern California, to the amazement of the whale watchers out on the water.

“Dolphin stampede behaviour can be described as porpoising out of the water at a high rate of speed. Porpoising is the fastest mode of travel for dolphins because there is less resistance in the air than in water,” Captain Dave’s Dana Point Dolphin & Whale Watching Safari said in a post accompanying the video.

According to the charter company, there are greater than usual numbers of baby dolphins at this time of year, resulting in spectacular sites like the one captured off Dana Point.

Dana Point is reported to have the highest density of dolphins anywhere on the planet, with a population of 450,000 common dolphins and mega pods numbering up to 10,000 members.