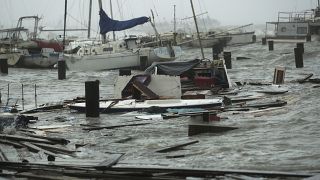 Hurricane Hanna roared ashore onto the Texas Gulf Coast on July 26, bringing winds that lashed the shoreline with rain and storm surge and even threatening to bring possible tornadoes to a part of the country trying to cope with a spike in coronavirus cases.

The first hurricane of the 2020 Atlantic hurricane season made landfall twice as a Category 1 storm within the span of little over an hour.

The first landfall happened 15 miles (24 kilometres) north of Port Mansfield, which is about 130 miles (209 km) south of Corpus Christi.

The second landfall took place nearby in eastern Kenedy County.

Hanna had come ashore with maximum sustained winds of 90 miles per hour (145 kilometres per hour).

Many parts of Texas, including areas near where Hanna came ashore, have been dealing with a surge in coronavirus cases in recent weeks, but local officials said they were prepared for whatever the storm might bring.