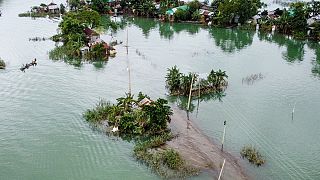 One-third of Bangladesh underwater due to flooding

Almost four million people have been affected by monsoon floods in South Asia, officials said Tuesday, with a third of Bangladesh already underwater from some of the heaviest rains in a decade.

The monsoon, which usually falls from June to September, is crucial to the economy of the Indian sub-continent but also causes widespread death and destruction across the region each year.

The heavy rains have swollen two main Himalayan river systems — the Brahmaputra and the Ganges — that flow through India and Bangladesh.

Bangladesh is crisscrossed by 230 rivers, including 53 shared with India.

Major rivers in the country are flowing above the danger level mark, posing a threat to human lives and livestock.

Most villagers were trying to stay near their flood-damaged homes, but some 15,000 had fled severely affected areas, officials said.