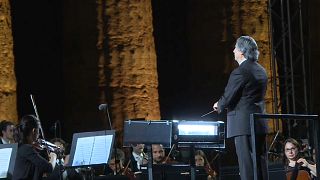 In a magnificent archeological site in southern Italy, musicians from the Syrian diaspora in Europe performed for their war-torn nation in a concert conducted by Riccardo Muti.

Sunday’s event was particularly symbolic as it was held in the ruins of Paestum, a site twinned with the ancient Roman city of Palmyra, the U.N. World Heritage site devastated by the Islamic State militant group (ISIS) five years ago.

The concert honoured the lives of Khaled al-Asaad, the director of the archeological site at Palmyra who was kidnapped and beheaded by ISIS militant in 2015, and of Hrevin Khalaf, the Syrian-Kurdish activist who was raped and killed by Turkey-backed Islamist fighters in 2019.

The Syrian Expat Philharmonic Orchestra, together with the Luigi Cherubini Youth Orchestra founded by Muti, played Beethoven’s Symphony No. 3, known as the ‘Heroic’.

Muti said he hoped the multi-cultural concert sent a powerful message of peace and fraternity.

"Today, saying I am Italian, you are German, he is French and that other guy is Syrian (…) means nothing," he said. "We are all in this together, and what happens there must interest the whole world."

The concert in Paestum was Muti’s 24th "Roads of Friendship" concert. Muti launched the series in 1997 in Sarajevo, shortly after Bosnia's 1992-1995 civil war ended.

He has since travelled to cities wounded by war, including Beirut, as well as in ancient and historic sites to rebuild ties with places that have made history, including the ancient Roman amphitheatre in the southern Syrian city of Bosra.

Sunday’s event was part of the Ravenna Festival summer series, which runs until July 30.

Watch the report in the video player above.