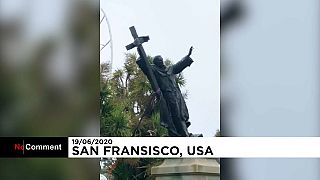 In the US, protesters in the city of Raleigh, North Carolina pulled down parts of a Confederate monument on Friday night and hanged one of the toppled statues from a lamp post.

Police officers earlier in the evening had foiled the protesters' previous attempt to use ropes to topple the statues.

Earlier in the day, hundreds of demonstrators had marched through downtown Raleigh and Durham to protest against police brutality and to celebrate Juneteenth, which commemorates the emancipation of enslaved African Americans.

Numerous Confederate statues have been vandalized or torn down across the South in recent weeks following the death of George Floyd, a Black-American man who was killed after a white Minneapolis police officer pressed a knee into his neck for several minutes.

There were similar scenes in San Francisco where protesters pulled down statues of Francis Scott Key and Junípero Serra on Friday night.

Key wrote a poem after witnessing a huge American flag being hoisted after a victory over the British during the Battle of Fort McHenry in the War of 1812.

That poem became "The Star-Spangled Banner", the national anthem of the US.

Key and his family had links to slavery.