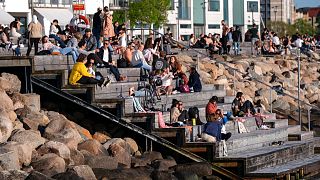 All Europeans are welcome in Sweden these days, but it’s not reciprocal.

As several European countries reopened their borders to EU tourists on Monday, Swedes are still not allowed to visit their Nordic neighbours because of the nation’s looser coronavirus containment strategy and higher COVID-19 death rate.

Denmark, Norway and Finland are all keeping their borders closed to Sweden for now, with only a few exceptions.

Denmark is allowing entry to Swedes working in Denmark, those only travelling through the country, those who own a summer home in Denmark or who are in a relationship with a Dane, according to The Local.

Norway has lifted travel restrictions with other Nordic regions with low infection rates, but for Sweden, only the island of Gotland meets the criteria – the rest of the country remains off-limits.

"I realise this is a big disappointment. But the restrictions are based on objective criteria that are the same for everyone," Norwegian Prime Minister Erna Solberg said. "If we open too quickly, the infection can get out of control."

Sweden, for its part, has no entry restrictions for travelers from the EU, Switzerland, Norway, Liechtenstein, Iceland and the UK. Keeping its borders open to Europeans has been part of the country’s unconventional approach to tackling the coronavirus.

The Swedish foreign minister, Ann Linde, told local media she was "genuinely worried" about the future of Nordic relations.

"There is such close cooperation between these countries when it comes to jobs, trade, even just neighboring towns," Euronews reporter Per Bergfors Nyberg explains from Stockholm.

"But now, if you look at a map with Sweden in the centre, you've got Norway, Denmark, and Finland all around you saying: don't come here.

"What changes for Sweden is that this summer, we're looking at a staycation – people will have to go on vacation in Sweden instead of traveling to Norway, to Denmark, to Finland."

It’s not just these Scandinavian countries snubbing the Swedes. A number of EU member states have special conditions for people arriving from Sweden.

Czech authorities, for example, will require arrivals from Sweden to show a negative COVID-19 test or to self-quarantine, along with travelers from Portugal and Poland's Silesia region.

Many German regions have quarantine rules for arrivals from Sweden, while Austria is opening up on Tuesday to European neighbors except Sweden, Spain, Portugal and the UK.

Sweden has one of the world’s highest per capita death rates from COVID-19, with 47.86 deaths per 100,000 inhabitants – around 5 to 10 times more than its Scandinavian neighbours.

Sweden and Poland are the only EU countries to have not yet passed their COVID-19 peak, the European Centre for Disease Prevention and Control (ECDC) warned last Thursday (June 11).

Sweden’s light-touch coronavirus strategy has drawn attention from around the world. Some have praised it for shielding the nation’s economy and way of life. Critics have blamed it for the country’s relatively high mortality rate.

Unlike its neighbours, Sweden avoided a strict lockdown. It banned large gatherings, closed universities and high schools, and urged citizens and businesses to keep the virus at bay with social distancing. But schools remained open to younger children while restaurants and bars kept serving.

"We’ve followed the same main strategy as others," Lofven said in an interview with state broadcaster SVT on Sunday evening. "Which in other words means keeping the contagion at levels that the health-care system can handle."

He added that it was too early to draw conclusions about the "success" of Sweden’s strategy.