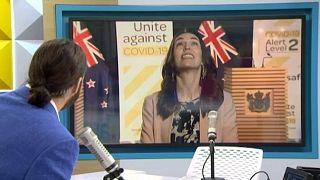 This is the moment an earthquake struck as New Zealand's prime minister, Jacinda Ardern, was in the middle of a live television interview.

"We're just having a bit of an earthquake here, Ryan," Ardern said as she was being quizzed by  Auckland-based AM Show presenter Ryan Bridge.

She looked briefly concerned but never lost her composure as a moderate 5.6-magnitude earthquake hit the country's North Island.

It happened on Sunday morning around 8 am local time (22h CEST) at a depth of about 52 kilometres (32 miles).

There was sustained shaking in Wellington, where Ardern was being interviewed, but there were no initial reports of any injuries.