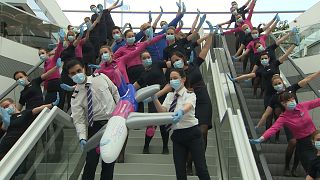 The few visitors at Budapest Airport were treated to a spectacular sight recently. 50 flight attendants from the airline Wizz Air were dancing at various locations of the airport.

It was one of the stewards' idea to try to do something nice in their new plentiful free time.

Currently Wizz Air can operate only 10-15 per cent of its flights.

The most popular destinations are the places where people simply want to go to be at home. Many Hungarians are living in the UK, especially in London, that's why the flight between Budapest and London is busy.

Wizz Air is financially stable compared to other airlines in Europe. They didn't need to ask for government help. But they had to cut costs, which materialized in the dismissal of 1000 people, 19% of their workforce. And they believe they won't need any new staff for at least half a year.