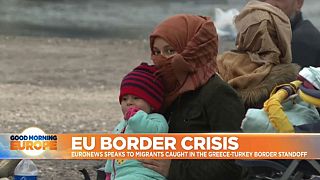 Turkish President Recep Tayyip Erdogan said on Wednesday that there was "no difference" between the Nazis and the Greek authorities forcibly repelling thousands of migrants seeking to reach Greece after the borders were opened by Ankara.

"There is no difference between what the Nazis were doing and the images coming to us from the Greek border," Erdogan said in a speech in Ankara, also calling the Greek authorities "barbaric" and "fascists".

It was the latest escalation in the crisis, which has seen the European Border and Coast Guard Agency sending reinforcements to the frontier between Greece and Turkey.

As the stalemate continues, it's an anxious, and increasingly tense wait for those caught in the crisis, as authorities use tear gas and water cannon to maintain control.

In an exclusive report, Euronews' International Correspondent Anelise Borges travelled to the Turkish side of the border to speak to those left waiting for what they hope will be a new life.

You can watch the full report in the player above.

Watch as the EU flag arrives at the Ukrainian parliament

Couple among first to wed as same-sex marriage becomes legal