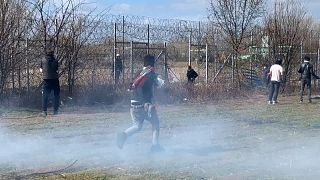 Teargas and water cannons fired at migrants on Turkey-Greece border

Greek border police fired teargas toward migrants on Saturday as tension continued at a border crossing in the Evros region.

Footage from Kastanies, a Greek village situated on the border with Turkey, also showed a fire engine and water being sprayed at the migrants.

Thousands of migrants have been trying to get into Greece through the country’s eastern land and sea borders over the past week, after Turkey declared its previously guarded borders with Europe were open.