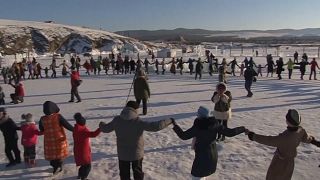 In the vast frozen expanse of Lake Baikal, Siberia, festival-goers dance in a circle to mark the Lunar New Year.

At the top of what is believed to be the deepest lake in the world, people from the vast region of Siberia and beyond take part in the dance, known as "Yokhor".

The Sagaalgan festival lasts the entire first month of the Buddhist lunar calendar, under which New Year's Day fell on February 24, 2020.

The Buryat people are the largest ethnic group in the vast mountainous region of eastern Siberia and speak the Mongolian language.

According to UNESCO, their language is in danger of extinction, but event organisers say Sagaalgan is an important tool in keeping the culture alive.

On top of Lake Baikal, eight ice sculptures have been carefully carved to mark the festival.