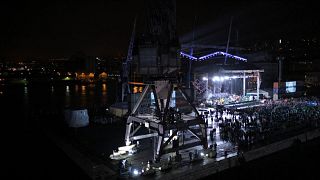 The city of Rijeka in Croatia on Saturday held its opening ceremony for the start of its year as European Capital of Culture 2020.

The port city is the first in the country to be awarded the title, one it shares with Galway in Ireland.

Some 220 organisations and societies from 40 countries gathered to watch the opening ceremony, performed by Opera Industriale, which detailed the city's history with industrialism.

The show featured more than 200 performers, 400 bellmen with 3,000 cowbells distributed among the audience before the performance so they could participate.

The performance is the first in a year-long programme of events which will take place in the city.

Rijeka (meaning “river“ in Croatian) was named after the river flowing into the Adriatic Sea. Situated in the North Adriatic, more precisely in the Kvarner Bay, Rijeka is around 90 minutes' drive from the Croatian capital of Zagreb, and from Trieste in Italy, and some two hours’ drive from the Slovenian capital of Ljubljana.