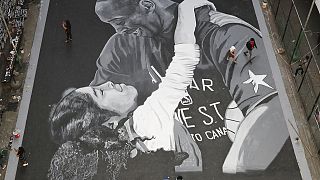 Basketball fans in the Philippines created a giant mural to honor Kobe Bryant and his 13-year-old daughter Gianna, who died in a helicopter crash at the weekend.

The mural, painted on a basketball court in a Manila, tenement building shows Kobe hugging Gianna.

It was painted within 24 hours of news of their deaths.

Fans offered flowers, lit candles and wrote dedications on the walls around the court.

Kobe Bryant was beloved by many Filipino fans as one of the greatest to have ever played basketball.