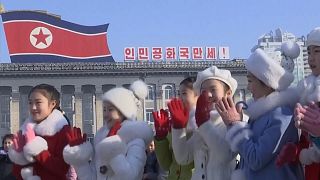 North Korea joined in Lunar New Year celebrations on Saturday, beginning with a traditional show of loyalty for the country's former leaders.

Citizens laid flowers and bowed at the foot of giant statues of Kim Il Sung and Kim Jong Il which stand on Mansu Hill, overlooking the capital of Pyongyang,

It's a ritual all over the country for people to give shows of respect to portraits and statues of the Kims on any major anniversary or public holiday.

This year's Lunar New Year comes amid fears of the deadly new virus spreading across China and other parts of the world.

North Korean authorities have not yet announced any impact from the new virus spreading from neighbouring China, although tourists and other visitors have been stopped from travelling from China to North Korea.