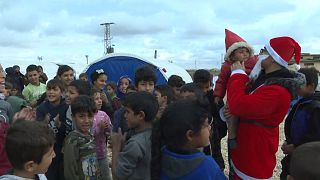 The gesture is part of the "We are with you" campaign organised by Kurdish Syrian youths living abroad who decided to send gifts to displaced children as a result of the eight-year-old conflict in Syria.